Lightheadedness, sometimes referred to as Light Headed, is a visual illness first seen in Hogsport. This illness can be treated in the De-Lux Clinic by a Doctor. Lightheadedness is considered an easy difficulty illness and can be found in various hospitals across Two Point County.

Patients suffering from Light Headedness will go through an alarming change where their head is transformed into a giant light bulb. As they wander through the corridors of the hospital, the giant bulb head throws out light and illuminates their surrounding environment. Occasionally the bulb will flicker in unison with other Light Headed patients.

Once diagnosed, a Light Headed patient will need to visit the De-Lux Clinic. Where a Doctor will attempt to cure the patient.

The cure involves the De-Lux O-Luxe machine. The patient will need to have the bulb unscrewed. This is replaced by a newly 3D printed head which is screwed back into the neck.

This procedure looks alarming for the patients, but not painful.

Coming down with something? Feeling a little woozy? Got an actual lightbulb for a head? Ah. You’re suffering from Lightheadedness.

It’s a visit to the De-Lux Clinic for you. We’ll just need to unscrew your head, remove it from your body, and gently replace it with a highly sophisticated 3D-printed approximation of what we guess your head looked like. No photos please, we don’t want to know.

The following table lists this illness's diagnosis modifiers for each room (for an explanation of how the modifiers work, click here).

Lightheadedness is treated in a De-Lux Clinic by a Doctor.

Below is a list of hospitals in which this illness will appear. The illness may arrive as a general admittance

, on an emergency only basis

, or possibly both, dependant on the hospital.

icon, accompanied by a number, represents how many patients can be expected in the emergency groups that arrive.

Where the hospital features a Star Level (

) next to it, this illness will only appear as a general admittance after that Star Level has been achieved. The illness may appear earlier than this in an emergency, if applicable.

icon indicates that the illnesses appears in the R.E.M.I. X variant of that hospital. This will always be listed separately to the Career Mode version of the same hospital. It is possible that any given illness may appear in both versions.

'Trevor' suffering from Light Headed in the official trailer. 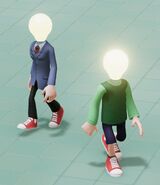 In Two Point Hospital, as in life, some people are just brighter than others.

Treatment in progress
Add a photo to this gallery

Retrieved from "https://two-point-hospital.fandom.com/wiki/Lightheadedness?oldid=30556"
Community content is available under CC-BY-SA unless otherwise noted.