The Golden Toilet can be obtained by signing on to Two Point Hospital's Hospital Pass. The Hospital Pass unlocks the Golden Bathroom Suite also including the Golden Sink and Golden Hand Dryer.

The walls of the cubicle are tall and gold with grey edges, with a matching doorframe and dual doors on the front. The toilet itself and its cistern are likewise gold. A bare metal pipe connects the cistern to a gold water tank fixed above, and on the user's right-hand side can be found a pink toilet paper dispenser in gold.

A patient or member of staff using the toilet will have their Toilet Need completely reduced.

By contrast to the regular Toilet Cubicle, the Golden Toilet has an unmarked attractiveness effect, and grants its room three times as much prestige.

A Janitor can be called to unclog the Golden Toilet manually by the player, or will do so automatically when the Golden Toilet's maintenance gauge falls below 50%, assuming one is available. Their unclogging of it will restore the gauge completely.

The following Staff is required to unclog the Golden Toilet: 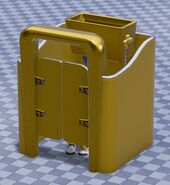 Golden Toilet in use

Community content is available under CC-BY-SA unless otherwise noted.
Advertisement